Preachers of LA continues to unfold and reveal the difficulties faced by several American pastors, ministers and bishops. In Season 1, Episode 5 – Perspective & Priorities we get to see the pressures and expectations of a pastor who has thousands of members in his flock. We also come to understand that they are also human beings and need psychological help as well.

According to their website, Pastor Wayne A. Chaney Jr. is the senior pastor of Antioch Church of Long Beach…under his visionary leadership the church has experienced exponential growth both numerically and spiritually. He is the grandson of the late Dr. T.M. Chambers, Sr. as well as the late Rev. Joe Chaney, Jr. He descends from a long lineage of pastors, teachers, and preachers; and possesses a rich spiritual heritage.

His commitment and involvement in ministry extends beyond Antioch and the local community. Throughout the country he has ministered to various congregations, conventions, and conferences.  Globally, he has touched the lives of people in countries such as Mexico, Israel, Indonesia, New Zealand, England, South Korea, United Arab Emirates, Israel, Malaysia, and Singapore.

He formerly served as President of the California National African American Network, SBC and Board Member of the National African American Network, being the youngest person to serve in both capacities. He was on the Executive Board of the California Southern Baptist Convention. Pastor Chaney serves on the Executive Board of Global Tribe International, whose mission is to rescue those in physical and spiritual poverty, reach communities with the gospel and recruit and empower young leaders.  He is the president emeritus of the Long Beach Ministers Alliance.

He and his wife Myesha are faced with issues related to being in the ministry full-time. His ministry has been so successful, he is now strained and pulled in many directions. Exercising wisdom, Pastor Chaney has sought to find an Executive Pastor. The search offered no one in the past, but Season 1, Episode 5 – Perspective & Priorities shows us that Myesha offered up herself for the position.

The Chaney’s sought the council of the board members of the church. The board brought up valid points of nepotism, how men would react to Myesha’s leadership in the church etc; but as Pastor Chaney said, ‘at the end of the day, the decision was his to make’. Their biggest concern was that of how it would affect their marriage and family life. The Chaney’s are depicted as the loving and sexual couple on Preachers of LA; therefore it is understandable that they would not want ministry business to affect their personal relationship. Both decided that they would not take church business home and work even harder to preserve their marriage.

The relationship issues faced by Bishop Noel Jones and Loretta Jones were highlighted in Season 1, Episode

5 – Perspective & Priorities episode. Bishop Jones eventually sought the help of a psychologist to explore his commitment issues. It was revealed that his mother practically abandoned him in Jamaica at the age of seven. He rarely saw her over the next decade. Due to this experience Bishop Noel Jones dives into his work and leaves no room for any romantic relationships. Certainly the Bishop can be admired for his dedication to the spreading of the gospel and the growth and well-being of the church, globally. Nonetheless, if as a man he is dating someone, he owes it to them to be honest and fix whatever issues are between them. 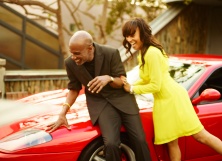 He is even provoked into a friendly wager by Bishop Ron Gibson, when they were playing pool. Bishop Ron Gibson said “That woman is physically beautiful, mentally intelligent, loves him to the core. My common sense along with the inspiration of the holy spirit told me that you wont find a woman better than that one.” To which Bishop Noel Jones responded, “Sometimes it’s not as easy as it seems. I’m running around preaching everywhere. Do I want the chance of ruining a marvelous friendship with marriage?! At the end of the day the decision has to be mine”.

In Season 1, Episode 5 – Perspective & Priorities, along with the therapist, Bishop Jones decides to take a break from Loretta and take some time to sort himself out, be selfish and decide what is best for him. Obviously Loretta is not pleased, but exercises some level of understanding.

Meanwhile, Deitrick Haddon and his new and younger wife, Dominique Haddon take a trip to New Orleans. Both enjoy each others company, romantically, now that they are legal to do so. Deitrick was performing at the Essence Festival and used some of his time to celebrate his new marriage. As in all marriages, certain things are revealed; weaves and all.

Cast of Preachers of LA:

Episodes of Preachers of LA:

Please leave a response about what you think about the post or how it has affected you. Thanks in advance. Cancel reply

This site uses Akismet to reduce spam. Learn how your comment data is processed.

Beloved, I wish above all things that thou mayest prosper and be in health, even as thy soul prospers. - 3 John 1:2 (NKJV)